I’m not a geologist. I’m an editor.

I’m an editor at a geological survey, which means I occasionally get to climb out of my windowless office and do the coolest thing geologists do: Field Work.

Well, they let me tag along.

I got to spend two days traversing the landscape of south-central Oklahoma, as three of my earth-scientist colleagues scouted locations for an upcoming workshop on the Simpson Group, which is a group of geological formations. The Simpson Group is the topic of a manuscript I’ve been editing for the last several months, and later this year it will be accompanied by a workshop and field trip. Even with our amazing technological advances, it is still necessary to scout locations before a field trip. You still have to physically walk up to an outcrop before you can tell whether it would be a good stop.

Even Google Earth can’t tell you if it’s on private property, blocked by a gate sporting an angrily worded “Trespassers Will Be Shot” sign. You never know if the property owner will be cool with you being on their land, or if the place on their land where there is a spectacular outcrop is also where they keep their bulls. 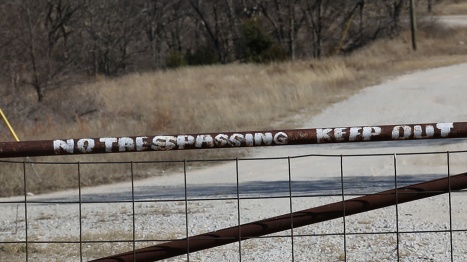 Perhaps even worse, one of the best outcrops we encountered was a road cut along a very curvy, two-lane road with virtually no shoulder, on which trucks were constantly barreling down at absurd speeds. Needless to say, it might be a stunning outcrop, but it wouldn’t be a good location to take a couple van loads of field-trippers.

I learned a lot about what all goes into planning a field trip, which is far more complicated than I ever imagined. In fact, in addition to the Simpson Workshop promo materials I was already planning, I’m now going to take my footage, add some voice-overs, and make a short documentary on “The Making of a Field Trip.”

I’ve got plenty to work with. I wound up taking nearly a 100 gigs of video and photos. I’m very excited about this project, but I’m looking at several months of tedious editing. Hard work, but finding time will be the biggest obstacle.

I scored some good fossils, including a few traced in pieces of “Birdseye Limestone,” which I heard is pretty rare stuff. I learned about this, as well as a litany of other facts, by shutting my mouth and listening to my colleagues in their casual conversations about geology, something they are all deeply passionate about.

No one lectured. They talked. I listened. I learned.

Can’t wait for the next time they let me tag along.