The Oklahoma Geological Survey monitors seismic activity throughout the state of Oklahoma and near the state border in neighboring states. To accomplish this, we need seismometers, which are the instruments that measure ground motion and record that motion on a seismogram. The more data from seismometers that are available, the more accurately we can locate earthquakes, measure their magnitudes, and assess their fault motions. While it may seem obvious why an earthquake’s location and magnitude are important, the fault motion is also important for research into regional stress fields.

The OGS earthquake catalog is available here: http://www.ou.edu/ogs/research/earthquakes/catalogs. Since OGS is part of the Advanced National Seismic System (ANSS), these data are also reported by the United States Geological Survey; we automatically contribute to the USGS catalog when we locate an earthquake at OGS.

High accuracy in locating earthquakes requires many seismometers. The OGS operates 90 ‘professional grade’ seismometers (Streckeisen STS-2, Guralp CMG-3T, Guralp CMG-6T, etc.) that we depend upon for accurate, three component ground motion recording. (“Three component” just means ‘up/down’, ‘North/South’, and ‘East/West’). Even 90 sensors leaves large areas poorly covered in Oklahoma, especially relative to other parts of the state that have been more seismically active recently. In such places, like near Pawnee and Fairview, a disproportionate number of sensors have been deployed for research projects following the M5.8 (Pawnee) and M5.1 (Fairview) earthquakes in 2016. The more dense a seismic array is, the smaller the earthquakes it can detect, and the more accurately it can do so. Having additional seismometers in Oklahoma, so that there are fewer ‘poorly covered’ areas, permits better detection of earthquakes of smaller magnitude.

One way to accomplish this at reduced cost is through citizen science. RaspberryShake personal seismometers (https://raspberryshake.org/) presented a unique opportunity to utilize them as tools for educating the general public on seismicity in Oklahoma and have the added bonus that they can be utilized as research-grade seismometers. 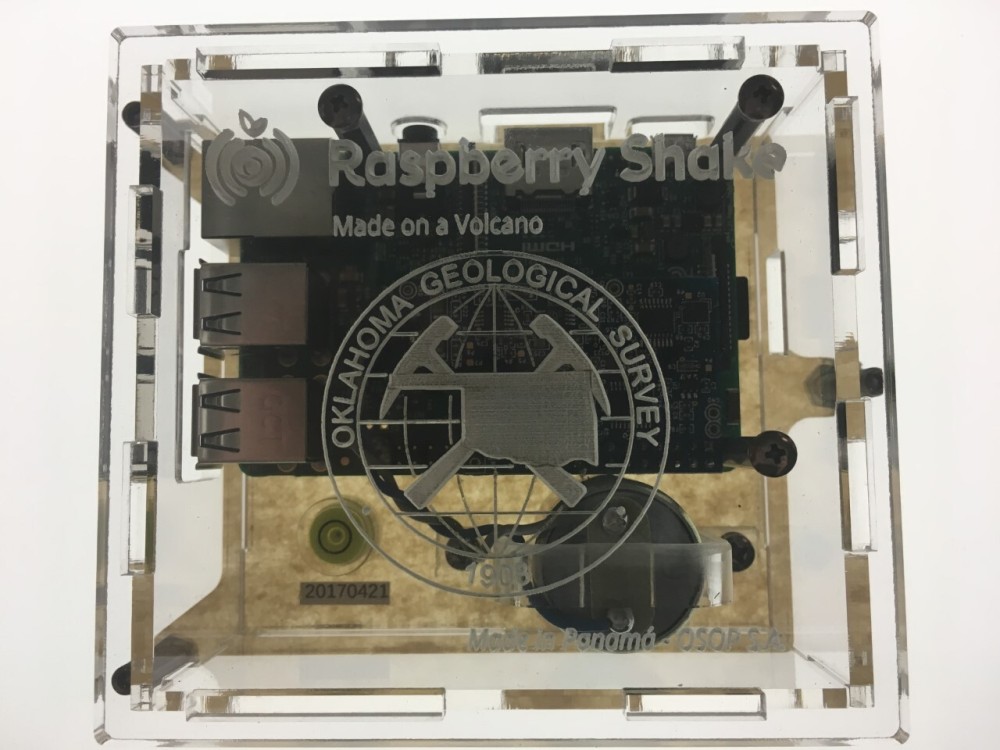 These relatively cheap, one component sensors require a different sort of infrastructure to install than a traditional seismometer. The ‘professional grade’ sensors we have deployed require a vault (concrete based cavity in the ground, 3-4 feet deep and wide), a water pump for the vault in case it floods (or for when it floods, rather), solar panels and batteries for power, cell modem for telemetry (permitting us to access their recordings in real time), power control box, GPS unit for accurate timing, and data acquisition system to run all this in concert. By contrast, RaspberryShakes require an internet connection, power from a typical wall outlet, and a flat surface to sit on that’s out of the weather. Such conditions are readily available in many public institutions, such as libraries and schools.

Through free software (i.e.: SWARM), the data of the RaspberryShakes can even be viewed in real time at the institutions where they are installed. This permits exhibits where the past 24 hours of waveforms can be displayed (which is cool to see when the very device that made those detections is right in front of you).

It’s even possible to have a real-time (past ~1 minute) waveform stream across the screen, prompting curious kids (and adults) to jump and see that the impact with the floor is immediately detected by the RaspberryShake. Additionally, OGS staff produced informational placards that discuss the cause of Oklahoma seismicity in recent years, how ground motion is used to triangulate an earthquake’s origin location, and the BLOSSM program itself.

These placards are provided to institutions where RaspberryShakes are installed, but not necessarily required for institutions that want to host a RaspberryShake. Such an interactive outreach and educational tool is extremely helpful in making Oklahomans aware of the seismicity within their state, and what is being done to monitor it.

For the OGS seismic network, each RaspberryShake tied into our network contributes its detections at an additional location in the state. This is especially helpful when that location doesn’t have a vaulted seismometer close by. Precise earthquake origin, including depth, is most strongly affected by having stations relatively close to the origin.

As of this writing, RaspberryShakes have been installed at seven libraries, sixteen schools, and miscellaneous other places including Leonardo’s Children’s Museum, Roman Nose State Park, and the OKC Zoo. The RaspberryShake also travels around the state to many outreach events to provide interactive educational experiences with seismicity, including the Women in Science conference, pictured below. 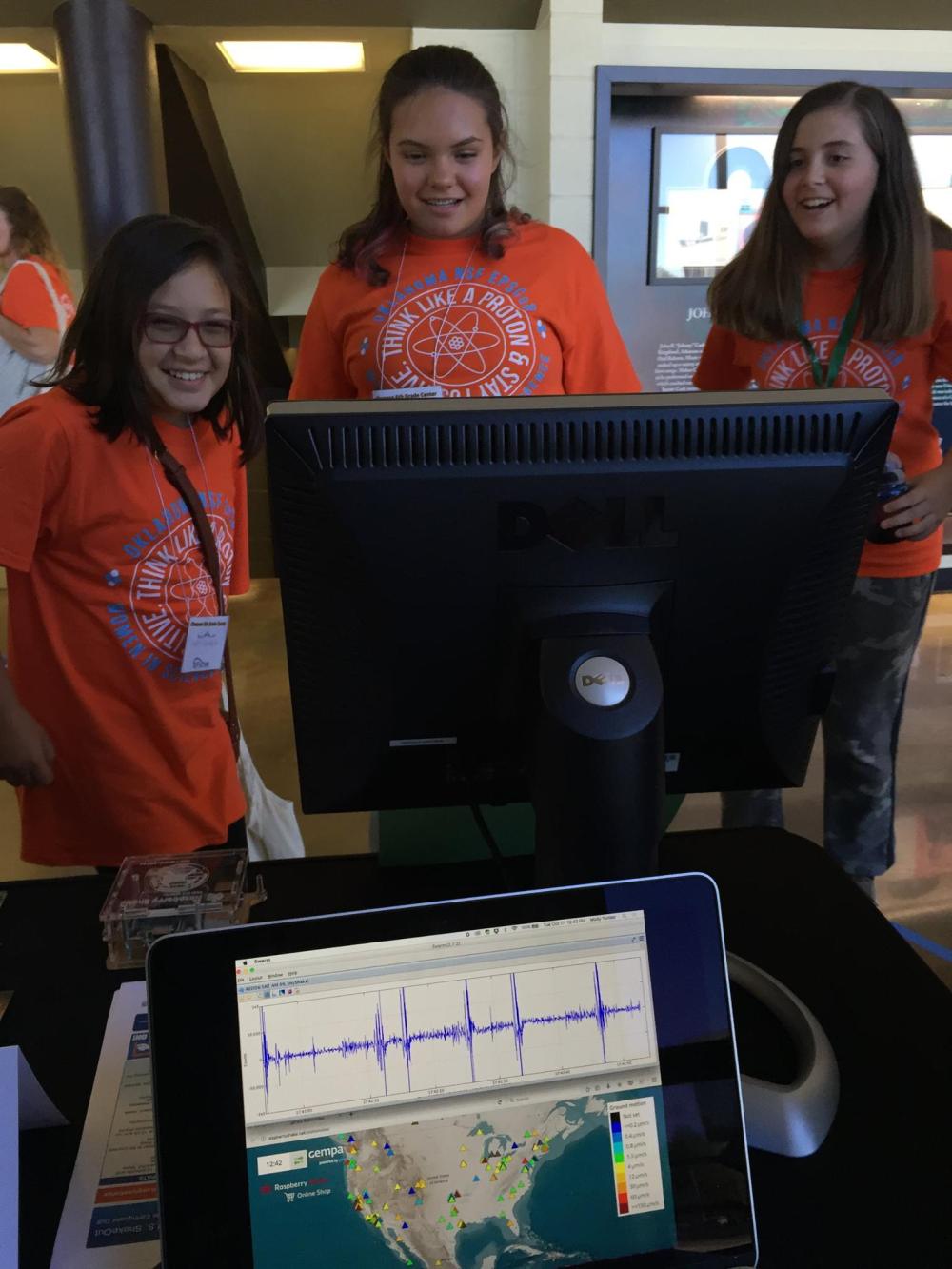 Please contact us if you are interested in hosting a RaspberryShake and accompanying informational material at your public building, school, educational program, or other facility.

RaspberryShakes are currently located at the following sites around Oklahoma-